Hard-edged poetry. How else could one characterize the films of Saul Levine, which cut as they do between jackhammers and B.B. King singing the blues? Levine is Boston's own outsider. In the culture of public television and whiz bang computer-generated images, Levine sticks to his expressionist, tactile guns as the king of Super 8. Perhaps better known nationally than in his adopted home city, Saul Levine has made a reputation for himself as a prime maker and promoter of the American avant-garde film.

In Boston, he is the moving force behind the Massachusetts College of Art Film Society, the only college film society in the country devoted to classic and the most avant of avant-garde films. He has been the teacher of three generations of filmmakers, now spread out across the world, who are paying homage in their own ways to his influence. Programmers worldwide call him to find out what is new in the field.

But it is his work as a maker of some of the most compelling audiovisual poetry around that most cogently presents Levine's aesthetic politics. Levine has always had a dual purpose: Social change and artistic self-expression. In his film New Left Note these two concerns came together in a detailed portrait of the New Left. More recently, his Notes After Long Silence manages to carry forth some of Levine's political perspective while rooting itself in the personal experience from which it originated. Notes After Long Silence is the latest in a series of "Notes" that date back to 1969. Sometimes addressed to individuals and sometimes, like Notes After Long Silence, based on poetry (in this case, Coleridge), the films are structured jottings of images and sounds, pieced together in patterns of rhyme, metaphor and what Eisenstein called "intellectual montage." One needs to look at Lost Notes to find the source for Notes After Long Silence. What we see in the later film is a resurrection of the image and the woman "lost" in Lost Notes.

In a certain way, the woman is only the occasion for the film, not its central subject. Her image is conjured up by meditation on another lost love and referred to on the soundtrack by the voice of a man proclaiming, " I was married." The central body of the film, however, is a dynamic, Burroughsesque treatise on race, sex, and the media. Levine's cut-up style highlights the splice marks, film cement and 18-frame gap between sound and image in Super 8 film editing. Its roughly hewn surface mimics the image, repeated throughout, of the destruction/construction site of the subway being built in Harvard Square in Cambridge, Massachusetts. The jackhammer is both a phallic symbol and percussion instrument as it is intercut with a blues musician, images of sexual intercourse, a toy woodpecker, a soap opera on television, Gerald Ford, and a myriad of other images and sounds. Self-reflexivity is characteristic of Levine's style, and one is not surprised to see the construction site frame, the subway, the television screen and other film referential images. Levine's grammar is set up to join media images without hiding the seams; media images of race and sex, love and violence, work and play, and presence and memory blend into a song of sorts of our time.

Super 8 sound editing allows Levine to play a duet with B.B. King. The filmmaker is both a worker and a musician/improviser. This is a guiding concept for the filmmaker. He places himself on the side of the blues, which as he sees it, is a working-class, free form expression of an oppressed people. He is positioned as filmmaker in contradistinction to television melodramas and images of war and its political proponents. This is a loose metonymy raised to the level of political analysis and improvised out of the material at hand. As such, it reflects Levine's long-standing debate with himself regarding the relationship between radical politics and radical form. He has had a long career as a political activist, but his films propose no agenda to catalyze social change. They exist as models, cracked and crystalline, that present complexities rather than solutions and reflect the dark beauty of the mire of our existence.

Notes After Long Silence is the most dense and energized of Levine's films since New Left Note. Characteristically, Levine was at work on other projects while he made his way through Notes After Long Silence whose style, understandably, required enormous amounts of editing time. During the time he was making that film, he completed somewhere between four and six other short films. The numbers remain vague. Some are reworked films, some are parts of longer films and some are what he calls "previews." They share the common characteristic of being lightly edited camera rolls, which often were shot in Super 8 sound. More recent films include performers (willed or not), including Levine himself. Occasionally they revert to an earlier abstract style of the contemplation of lights, le ns and movement.

Levine is currently much occupied with the preservation and distribution of his entire body of work. Since the vast majority of his work has been made in regular 8mm or Super 8 film, now nearly defunct gauges, Levine has been systematically preserving his films on l6-mm negatives. But what really engages him as both an artist and social activist is the distribution of his films on videotape. This filmmaker, committed to the projected image, has embraced the electronic image for the access that it can give him to the home viewer. He has taken great pain, and expense to release his work on videocassettes in enough quantity so that they are available for the price of a poetry monograph exactly the model Levine aspires ro. He would like to have his work looked at again and again, by individuals or small audiences at little expense. Distribution, too, is political. And on video, it is hard-edged as well. 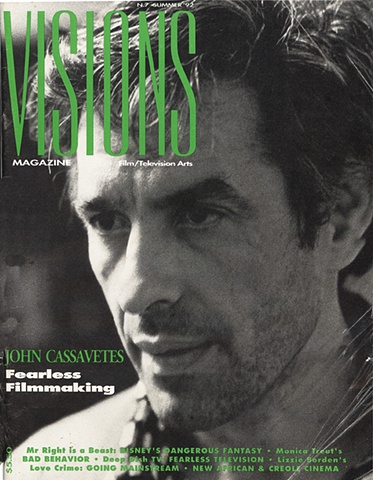