The French surrealist poet, Jean Cocteau, said that, “Film will only become art when its materials are as inexpensive as pencil and paper.” In the days before the invention of light video cameras, 8mm film came as close as you could to Cocteau’s dream. Saul Levine adopted the medium in the 1960s and began using the camera to record his daily life, out of which he developed his art.

Levine’s life has included some key events of an era, so his films evoke history from a fresh point of view. For example, his film, NEW LEFT NOTE, is based on footage from major anti-war demonstrations in the late 1960s. At the time, Saul played a leading role in a prominent student organization (SDS), so these events are seen from inside. Yet the finished film is edited primarily in terms of color, and it is structured poetically, in large part as a love poem to another student leader in the movement. Over the years, Saul has created a body of work that is, first and foremost, a collection of “cine-poems.” Yet these same films also give us a document, and a formally innovative record of the artist’s life.

Saul Levine’s films have screened throughout the United States and Europe. He has had major retrospectives at Anthology Film Archives (New York) and Harvard Film Archives (Boston) and has been featured in solo shows at the New York Film Festival and the Rotterdam Film Festival. His films and videos have also been exhibited at PS One/MoMA (New York), the Centre Pompidou (Paris), the Institute for Contemporary Art (Boston), the Whitney Museum of American Art (New York), Pacific Film Archives (Berkeley) and many other places. His work has also been written about in The New York Times, Artforum Magazine, and Cahiers du Cinema. In addition, Levine is also influential as a teacher at MassArt and programmer at MassArt Film Society (Boston). He holds an MFA from the Chicago Art Institute, where he studied with Stan Brakhage.

Levine is widely considered the master of small gauge (8mm) filmmaking in America, and he also works with 16mm film, video, sound, and performance art. He tends to push each medium to its limits, often through editing, where shots can be as short as one or two frames, or as long as a single 80-minute take. At MoCA Shanghai, we will present a selection of films that are mostly drawn from his ongoing series, THE NOTES. In the following interview, Levine discusses some of the ideas that went into the making of these films.

read the rest of the interview here 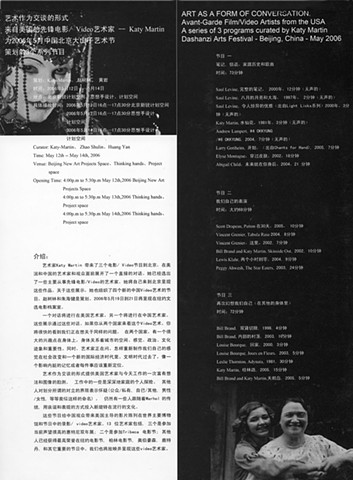